This weekend, Bogotá’s Japanese Karate Association kicks off its 2019 Panamerican Karate Championships in the Colombian capital. The significant sporting event ties in with the city’s Festival de Verano, a celebration of its 481st birthday, running from 3-11 August. Andres Vargas, Senior Legal Counsel for Biz Latin Hub and Secretary for Japanese Karate Association, will compete in the Panamerican Championships in Bogota this weekend.

Around 600 athletes have traveled to the city from 16 countries to compete in the two-day championship. Biz Latin Hub sits down with Andrés Vargas, our very own Senior Legal Counsel in the Bogotá Office, who also moonlights as Secretary of the Japanese Karate Association. Andrés talks to us about his and Biz Latin Hub’s participation in this exciting event.

What role will you be taking in this event?

I will be participating as a competitor in this event and represent Colombia in four categories:

The kata is a choreographed demonstration of an imaginary ‘kumite’ or combat against an adversary. In this competition, the team must be synchronized to have a good performance.

Can you explain your level of experience in karate, and your role within the association?

I’ve been training for 18 years, and am at Ni Dan (Second Dan) level. I train groups of people 3 times a week at a karate school that my wife and I run, called Jishin Dojo. We’ve been doing this for 5 years – our school now has around 25 karate practitioners.

The karate experience contains many factors – the most important thing is to be consistent with the training and always try to outdo yourself.

As Secretary to JKA, I provide legal support and advice on contracts, events such as this, and other matters.

What does it mean for you to participate in the Panamerican Karate Championships?

I feel very grateful doing this, because my whole family will be there. I feel committed to getting a good result because there’s going to be a lot of people helping me, supporting me and who have never seen me compete.

My friends, my family, and people from my workplace will be attending which gives me a big responsibility to do my best.

Why did you pick karate above any other sport?

There are two main things which influenced me in picking karate.

The first is when I was younger – my father bought lots of films that had martial arts in them. From those films, I was fascinated by martial arts actors such as Jean-Claude Van Damme, Bruce Lee, and Chuck Norris.

I was also very interested in Japanese culture or oriental culture, and so I chose to learn the most famous martial art combat from Japan – karate.

This is where I learnt about Budo. Budo is a term used in karate which talks about ethics and the technique of martial arts, not just in physical nature but more through mental thought processes. This includes looking at values like discipline and respect. It is the core and very notion of what karate is about. 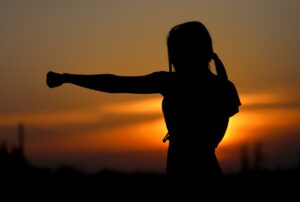 “[The discipline is] something that impacts us not just in karate at the academy, but also in our lives outside the academy.”

What values does karate teach you?

We have 5 principal values in karate. They are:

These are values which we are taught in every karate lesson, but they are also values which we practice and share outside of the class. So it’s something that impacts us not just in karate at the academy, but also in our lives outside the academy.

How do these values help you in your daily life?

Life can be hard, especially in a city like Bogotá where everything can feel rushed or busy. But karate has taught me techniques to slow things down and remain calm in different stressful or difficult situations.

What does participation in this event mean for Biz Latin Hub, as a sponsor? 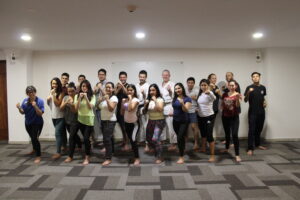 Biz Latin Hub’s support has been very important to the Japanese Karate Association, as the association looks to develop people, and focus on teaching and sharing karate’s principles.

Karate is a martial art which is not experienced by many nor is it supported by state entities. One of Biz Latin Hub’s co-founders, David Wright – who is someone who also does karate – had the idea to offer extra support to the association so that they can accomplish bigger goals they’ve set for themselves. He has been a fundamental part in helping the association.

What are your objectives for your fights in the Championship?

Firstly, I want to give my best. At the end, I want to look back and say that I couldn’t have given anything more, to just give everything I have. It is also about being a good sportsman, a good competitor and give respect to my opponents as well as showing a lot of emotion in this competition.

And finally: are you excited?

We’re a leading law firm supporting foreign businesses and entrepreneurs move into the Latin American and South Pacific regions. With our full suite of market entry and back-office services, we can help your business start off on the right foot in a new commercial environment.

It’s important to us to reach out to our community and support social development, as well as Panamerican integration. Sporting events such as the Panamerican Karate Championship, and the 2019 Rugby4Peace programme run by Fundación Buen Punto, share valuable principles that support social cohesion outside of the sports themselves.

If you’re considering a move into Latin America’s sports scene, we can help. Company formation rules and regulations differ across the region. Our local legal and accounting teams have the expertise and experience with complex compliance requirements to see you through the initial steps of your expansion. Contact us today here at Biz Latin Hub for more information.