Bringing Rugby to Colombia to Instill Values in Young People

In the sporting world, Colombia – and Latin America more generally – is traditionally considered to stand firmly in the ‘football’ camp.

However, an increase in exposure to sporting alternatives and sports diplomacy has seen a rise in rugby’s prominence, both locally and regionally. One organization, Fundación Buen Punto, goes beyond the confines of the field to promote shared values in post-conflict communities.

Rugby made it to Latin American shores in the 1970s through enthusiastic expatriates. During that time, Colombia’s English, French, and Argentinian expats working in diplomatic and oil company roles organized the country’s first rugby training and games.

Though something of a novelty for the predominantly football-mad region, the sport’s popularity is on the rise. Andrés Roberto Gómez, President of the Colombian Rugby Federation, confirmed there are currently 19,000 rugby players in the country. Around one quarter are women, and over half are aged under 18 years. This is testament to rugby’s appeal to young people, and offers sporting alternatives for different groups of people. 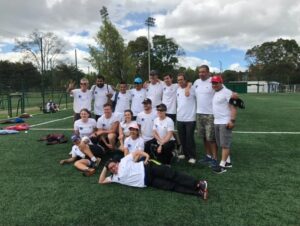 Fundación Buen Punto is a non-profit organization in Colombia that teaches skills and values in rugby and surfing to communities in former conflict areas.

Fundación Buen Punto, founded in 2014, is a non-profit organization in Colombia that works to teach skills and values in surfing, and more recently rugby, to communities in former conflict areas and where children may be at risk. Currently, they have been working in the Chocó, Mosquera and Bogotá regions.

Specifically, the foundation reaches out to vulnerable children and young adults who face exclusion from society due to their own or their family’s limited resources, or physical or psychological disabilities.

The foundation aims to go beyond teaching the rules of a world-favourite team sport; through community engagement, Fundación Buen Punto aims to build community relations and offer young people new opportunities. Their fundraising efforts go towards offering their values-based sports programmes to other groups, and organizing sports events and travel for young people.

How does the values-based sports programme work?

Fundación Buen Punto management, Andrew Wright and Lucas Marroquin, discuss how the method they use to bring rugby and surfing to Colombia was adapted from Brighton University in the United Kingdom and their non-profit Football 4 Peace International programme.

Andrew explains “this methodology focuses on the values that these sports can instill in young people who are at a disadvantage.

“The games we play aren’t what you’d expect from a typical rugby match. There’s no shouting or authoritative direction from one coach or referee. We give more responsibility to the kids to direct themselves in the game.”

“We aim to support these kids’ learning so that they can apply their lessons learned and leadership to other elements of their lives.” 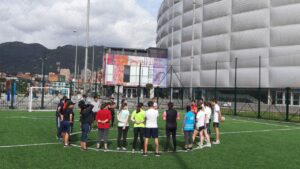 This month, the foundation brought 7 professors from Rugby 4 Peace to Colombia, to provide a new level of support to the communities they work with.

This month, the foundation brought 7 professors and graduates from the University of Brighton to Colombia, to provide a new level of support to the communities they work with.

Fundación Buen Punto ran a ‘train the trainers’ style event with around 50 coaches and teachers, to build capacity and share this methodology with others who work closely with young people.

Lucas Marroquin, President of the foundation, says “we’re focussed on building capacity for these communities and developing support networks that come not just from us, but from people who are also passionate about engaging with others through sport.”

The training was held in Bogotá. Fundación Buen Punto works with the support of other Colombian institutions such as Coldeportes and the recently established Ministry of Sport to give young participants comprehensive training and guidance.

“We greatly appreciate the support we receive from regional councils such as the Mosquera and Bogotá municipalities, and other government agencies.”

“Here in Colombia, football is the nationally celebrated sport. As a result, there’s greater division between teams, regions and individuals. Supporters are well aware of the high salaries of admired football players, connecting the sport with an element of class-stratification.

“Our programme aims to eliminate those feelings and behaviours of division, rivalry and classism. Rugby is a comparatively unknown sport to the local population. People aren’t fiercely backing one particular team, and rejecting supporters from others. It’s not so star-studded, glamorous, and political that it feels out of reach for people.”

It’s important to support those striving for a better future. At Biz Latin Hub, we’re backing the foundation because we can see the value their work brings to young people and their communities. Our team members, Diya Teeluck and Adrien Soto attended the Rugby 4 Peace programme to connect with Fundación Buen Punto participants and organizers.

Stay tuned for a summary of the day and insights from trainers and children supported by Fundación Buen Punto.