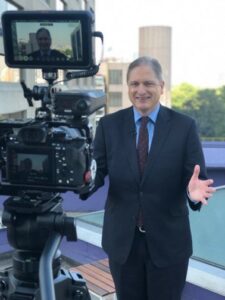 Tim has been traveling the world to film his series, The Airport Economist, following the publication of his book with the same title.

Tim has been traveling the world to film his series, The Airport Economist, following the publication of his book with the same title. We hear some insights on what business conditions are like in Latin America, according to Australia’s Airport Economist.

Can you share with us a little bit about your trade and business background?

Sure, I am unusual in that I have been a Chief Economist for the Australian Trade Commission (Austrade), the Australian Council of trade Unions (ACTU) the Reserve Bank of Australia (RBA) the university and the private sector!

It’s a most unusual mix of institutions, but that’s made it so stimulating for me as well.

What are the origins of ‘The Airport Economist’?

I travelled so much as the Austrade Chief Economist – I went to about 60 countries in 5 years – that I felt I was always at the airport. Hence the title of my first book, The Airport Economist, which later became the TV series and podcasts.

What drives your interest in Latin America?

I have always had a personal interest in Latin America as I knew a lot of Brazilians in grad school, and my brother lived in Peru.

I have been following Latin America since the 1990s, and I thought these countries don’t get much profile in Australia relative to Asia, hence the series. 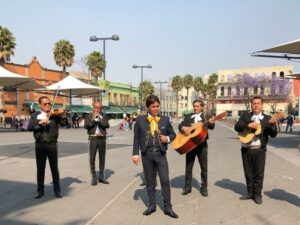 “I have been following Latin America since the 1990s, and I thought these countries don’t get much profile in Australia relative to Asia.”

What insights were you most interested to discover during your interactions with trade and other government officials about doing business in Latin America?

Probably the diversity of the place. We often talk about Latin America as a region but it’s so different as you head down from Mexicali, to Cartagena, to Tierra del Fuego.

It’s not just the physical landscape that changes, but the business landscape too.

Based on feedback from your interviews, what key challenges do Australian businesses seem to face when expanding to the region?

But there is help available. I think the host countries have very good government agencies like Pro Colombia and Pro Chile, and the Australian Ambassadors are very good and the Government of Victoria has good Trade Commissioners. But there could be more corporate interest from Australia.

What are the questions most commonly asked by Australian businesses about Latin America?

First, there’s the businesses with no experience in Latin America. They mainly ask about risk and potential political issues. Mainly because of what’s happening in Venezuela, but to a minor extent the IMF intervention in Argentina and Presidential elections in Brazil.

But the businesses who actually have experience in Latin America and know the place have no such concerns, and have generally found the region a very good place to do business despite the press headlines.

Who helped you put Airport Economist together?

We were generously supported by the Australian Government through the Council on Australia Latin America Relations (COALAR), the Government of Victoria, the World of Hyatt where we stayed, and of course, LATAM Airlines!

My production team from Pinstripe Media did a superb job. The Australian Ambassadors and their teams in each Embassy looked after us very well.

What’s next for you?

Next, we are doing an Airport Economist special around Rural and Regional Australia before we head to the Middle East, Europe and North America before we return to Asia.

There’s no one recipe for doing business in different Latin American countries. Watching Tim’s Airport Economist series for tips and tricks from experts and officials on moving into the region’s attractive and rapidly-growing markets.

Looking to set up overseas? Talk to us

Has the Airport Economist given you food for thought?

As Australia strengthens its connections to Latin America, different trade opportunities emerge in the region. A promising future lies ahead for Australia and its budding partnerships with Latin American countries such as those covered in Tim’s series.

Biz Latin Hub offers a wealth of back-office services to help you with doing business with and across the region.

Whether you’re from Australia or another part of the world, we can provide you with local know-how, guidance and support to ensure long-term success for your business.

Get in touch today at [email protected] to find out more.