Are the Brazilian Biofuel and Feedstock Industries a Bygone Investment?

Brazil finds itself at a fascinating juncture in their history, an undoubtedly ‘developing’ nation, a maturing economy, with a radically reforming president at the reins. All the while, the world holds its breath!

Brazil leads the global market in a number of industries – iron ore, crude petroleum, sugar, meat, and biofuel production. Biofuels are the fuel derived exclusively from living matter and in Brazil, the most popular form is the extraction of ethanol from Sugar cane through fermentation and distillation.

The biofuel industry in Brazil underwent massive growth between the years 2008-2014, producing the ‘world’s first sustainable biofuel economy’. After which, many agreed the plateau in 2015 meant the end for investment in this particular industry within Brazil’s rural sector. Nevertheless, could Brazil’s rapidly changing economic environment as a result of political reform promise opportunity to foreign investors looking into alternative energy sources?

What is Different Now? BioFuel and Feedstock in Brazil 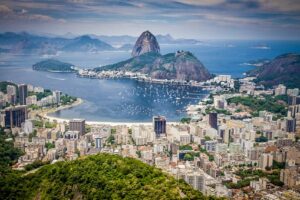 It is now estimated that 90% of all new car sales in Brazil are fitted with flex-fuel engines.

Oil and gas are ever-proving their volatility with many now reverting to more stable sources, such as biologically-produced ethanol. Oil prices from 2015-18 alone have fluctuated an entire 200BRL/bbl, an instability Brazil have struggled to withstand. Brazilian road-users particularly suffer from fluctuations in oil pricing but the extensive availability of flex-fuel vehicles (FFVs). The ability to alternate between ethanol-based and petroleum-based fuels has halted Brazil’s petroleum reliance.

It is now estimated that 90% of all new car sales in Brazil are fitted with flex-fuel engines. With which 50 billion litres of ethanol is calculated to be consumed in the year 2020, a 30% increase from 2015. With an increasing domestic demand for ethanol, requires an increasing supply of Sugarcane.

It is clear to see the growing domestic demand, but what about the growing interest overseas? Europe is ever-reducing its consumption quotas for carbon-sourced fuels and increasing their dependency on greener forms of energy. By 2020, the EU aims to have 10% of the transport fuel of every EU country coming from renewable sources such as biofuels.

However, with limited land availability, Europe has struggled to expand its own feedstock industry. As it currently stands, Europe’s aims for biofuel consumption outweigh their capability for feedstock production. This is because the European Commission has recently published its most ambitious energy policy to date.

Presently, Brazil uses most of its biofuels domestically with minimal export (only 5 billion litres of ethanol exported in 2010). However, Brazil has extensive shipping expertise and a forecast for further global trade. Therefore it stands itself in good stead to export more biofuels to Europe in the future, thus increasing the demand.

‘With change, comes opportunity’ is what many industrialists will be telling themselves on the back of the recent political restructuring in Brazil. The election of Jair Bolsonaro certainly presents Brazil with an exciting 4 years, but so too for foreign investors. As well as the privatization overhaul of many Brazilian industries, the new president looks to advance investment opportunities to foreigners. He intends to do this by opening up Brazil’s market to a more global audience. To do this, Bolsonaro plans to lower tax burdens on foreign businesses. It appears a newer, more global Brazil is on the horizon – is this what energy investors have been waiting for?

The growth of sugarcane generally yields a vast 800 gallons of ethanol per acre, far exceeding any other crop.

Brazil boasts ideal conditions for efficient production so, with rich soil and a suitable climate, it is no surprise that Brazil is the second highest biofuel producing nation in the world. Unlike fluctuating seasonal conditions in Europe and North America, Brazil can produce multiple crops in a single year. Therefore, improving the efficiency of the land. The growth of sugarcane generally yields a vast 800 gallons of ethanol per acre, far exceeding any other crop.

In addition to the beneficial natural conditions, Brazil has a strong infrastructure bolstering the biofuels industry. One which has assisted feedstock producers since the 1970s. A number of government initiatives sponsor and administer biofuel production such as ‘The Better Sugarcane Initiative’, ‘Social biodiesel program in Brazil’ and the ‘National Alcohol-based Fuel Program’.

These programs provide administrative precedent and a framework for new investors to work around. This clearly demonstrates Brazil’s ability to host both exceptional natural and manufacturing conditions for biofuel production.

What Is the New President’s Impact?

Brazil’s new president seeks to massively reform a number of sectors, of which the mural is one. Bolsonaro’s allusion to the government merger between the agriculture and environment ministries has triggered many to suspect the further cultivation of Amazonian land providing a positive juncture for agricultural opportunities.

Thousands of square kilometers make up the Amazon rainforest, and it is Bolsonaro’s intention to make more of that accessible to farmers, with the positive impact being an injection of (foreign) direct investment into the rural economy. This expansion would certainly spell opportunity for those interested in investing in the Brazilian biofuels sector.

To conclude, although the biofuel boom in Brazil between 2008-2015 was certainly a good time to invest. The infrastructure, the superb climate, and rich soil still exist to grow a good business today. No matter how interesting a reflection Bolsonaro’s impact and the foreign demand are, these indicators are undeniably reliant on contingent circumstances, and certainly a prognosis to be taken lightly. Nevertheless, no matter how literally this article is to be taken. Brazil, Bolsonaro and biofuels certainly are three fields worth investigating further, even if not necessarily all together.

What Can Biz Latin Hub Do?

The field of biofuels and energy production is undoubtedly vast and as a potential investor, research into the field can be complicated and fruitless. Constant questions arise…

The questions are endless and completely unanswerable without local help. Fortunately, answers are what we at Biz Latin Hub are here to provide. Our team of Latin American business and legal experts are here to act as your partner. We can conduct due diligence and research to answer your queries. With our research capabilities, we can turn your potential investment into reality. Contact us today for personalised support [email protected].