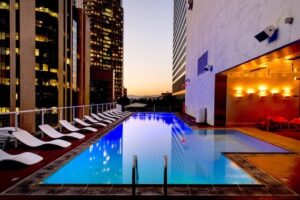 Colombia’s economy is one of the strongest in Latin America, thanks in part to its natural resources (coffee, oil, coal), the size of its domestic market, and the influential growing middle class. This gives it the edge it needs to be a key player in different industries on the rise in the country. One market trend we have had our eye on is the growth of the Colombian hotel industry. Here, we outline the recent history of Colombia’s economic growth, the reason the industry is growing, and the opportunities and incentives for those looking to invest in Colombia.

Although Colombia has experienced an economic slowdown due to the drop in oil prices and has tightened its budget in order to reduce inflation, the situation is stabilizing as the country increases public infrastructure projects and sees a growth in private investment.

In various industries, the economic gains to be capitalized on are impressive while Colombia makes the comeback so many have been waiting for.  This positive outlook is evident in the increase in the amount of hotels being erected in light of the growing tourism and stability in the country.

The hotel industry boom is directly related to the recent surge in tourism that the country has experienced in the last few years. This offers advantageous opportunities in the industry that many are making the most of. Here, we briefly explain the reason for this surge, and more importantly, why you don’t want to wait til the last minute to make your reservation at the oasis of prosperity awaiting this growing economy.

According to the Colombian Ministry of Tourism, in 2015 almost 2.5 million foreign tourists traveled to Colombia, a number representing a 12% increase from 2012.

Some of the factors which contribute to the development of tourism in the country include the following:

Over the past few years, Colombia has positioned itself as one of the most favorable places to do business in Latin America. According to ProColombia, the country has opened 22 new hotels in 2016. Encouraging this industry investment are a number of favorable tax and legal incentives for those wanting to build hotels in the coming years. Some of these include:

The Colombian hotel industry attracts investors from all around the world to thriving cities like Bogota and Cartagena. These two dynamic cities hold large amounts of wealth due in part to foreign buyers and business investors making the most of the tourism boom in Colombia.

Given the favorable conditions in the country and the region as well as the economic growth, Biz Latin Hub through its company Colombian Business Services offers the experience and support necessary for investors to have a successful market entry in Colombia. Feel free to contact us now.