In the last couple of years, the economies of Central America have started to show major signs of growth and economic development, creating a diverse range of business opportunities. While countries such as Costa Rica and Panama remain as the leaders in Central America, taking advantage of sector diversification, highly educated (and often bi-lingual) populations, and of course, the Panama Canal, there are other jurisdictions in the region that are beginning to spark foreign interest. 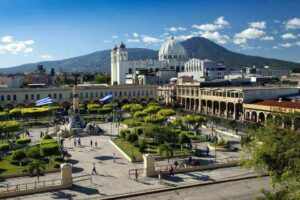 El Salvador reached a 2.1% GDP growth in 2017 mainly due to an increased output in the agriculture, livestock, forestry, manufacturing and mining industries

This is particularly true for the tiny nation of El Salvador. The country’s strategic location (forming a natural bridge between North and South America), a range of attractive sectors and an increasingly open business environment have resulted in a steady increase in investment opportunities for private business.

Since the end of the civil war, and the signing of the peace accords in 1992, El Salvador’s economy recovered and it’s traditional agricultural and export-based economy has diversified, with both the manufacturing and service sectors experience encouraging growth. In the early 2000’s, the country increased the number of agricultural exports and manufacturing output, in addition to the number of constructions projects in the region.

Reasons to consider El Salvador as an investment / Commercial location?

El Salvador reached a 2.1% GDP growth in 2017, mainly due to an increased output in the agriculture, livestock, forestry, manufacturing and mining industries; accounting for approximately two-thirds of the GDP growth.

The country has also made great strides in regards to social and political development and continues to make progress in advancing human development outcomes mainly through the expansion of access to public services for citizens of the nation. These developments have boosted household consumption, and as such, spurred economic growth. There are a variety of reasons that more and more investors are looking towards in El Salvador as a place to engage in business. Some of these reasons include:

Attractive business sectors and benefits of investing in El Salvador

El Salvador is a free, export-oriented market economy and it has an extremely stable and integrated economy. The country has an attractive and dynamic business environment due to a policy-driven strategy focused on building secure macroeconomic fundamentals and strong institutions. The government has focused on promoting competition and international integration, and creating a fair and equitable society in which all citizens benefit from economic development.

The government has introduced ‘business-friendly’ policies to encourage private investment. El Salvador provides tax incentives to attract foreign investment in the form of new commercial and industrial development. Foreign direct investment has had a vital role in driving El Salvador’s rapid modernization, encouraging sustained economic growth which has resulted in great improvements in social conditions for the population as a whole.

For this reasons and more, there has been a sharp rise in private businesses who decide to incorporate companies in El Salvador and begin commercial activities in the region.

El Salvador’s open economy, plus regional trade agreements (bilateral, multilateral, free) that the country has entered into have made this small Central America nation become internationally competitive, and as such, the region has become a great platform for businesses looking to launch trading companies. Some of the FTAs that El Salvador is apart of include:

Trade is significant for El Salvador’s economy and contribute massively to the countries GDP, as well as being a driving force behind employment in the country. In general, governmental policies don’t interfere with foreign investment.

El Salvador is also a part of the ‘Common Market’, a broad treaty whose main objectives are the free exchange of products originating in the member states. The country is now negotiating trade treaties with Canada and CARICOM and is considering treaties with Peru and Israel. There is no doubt that this sector will continue to grow in the coming years. With the right support in the region, foreign companies can take advantage of the trade benefits of operating in El Salvador.

The main sectors of export of services are:

During the early 1970s, there was an increase in the value of manufacturing chemicals and textiles. Later on, in the year 2000, the manufacturing sector grew at a rate of 4.5%, making this sector one of the largest contributors to El Salvador’s GDP. In 2001, the country received substantial amounts of foreign direct investment in the industrial sector, and this trend has continued until this day and age. El Salvador’s manufacturing capabilities, combined with a ‘low-cost’ workforce have spurred growth in this sector.

Industrial production increased 4.6% in May of 2018 over the same month from the previous year.

What to Learn More About Doing Business in El Salvador?

El Salvador, despite receiving plenty of negative press, has been slowly converting into a respectable Central American jurisdiction to conduct business, with a range of attractive commercial opportunities for smart investors.

Biz Latin Hub is able to assist you in El Salvador through the provision of tailored commercial representation and back-office services, Contact our Country Manager, Diego here at Biz Latin Hub to see how we support you and your business.

For more information on doing business in Latin America, watch the following video!