Evolution of Fintech in Latin America

As a region, Latin America’s economy is reportedly now growing faster than Asia’s. Progressive governments are front-footing legislative changes and preferential regulatory treatments for investors, both local and foreign, to boost business activity and economic growth.

New prospective partners are seeking cooperation commitments and free trade agreements with Latin American countries and regional platforms such as MERCOSUR and the Pacific Alliance.

Swelling middle classes are demanding more from producers and exporters, and buying and using phones to engage with the commercial landscape. As a result, technological innovation is sweeping through previously neglected industries in Latin America. In particular, financial technology (fintech) is developing rapidly to keep up with a momentous shift in the region towards online financial interaction.

Evolution in Latin America – What is Fintech? 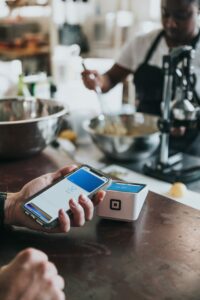 Crucially, the fintech industry connects technology with financial services, enabling the latter to become more accessible and convenient for people. Banking through online applications is one example of this; processes such as checking a bank balance or transferring money is now faster through the application of automated functionalities.

Fintech has many branches that aren’t just limited to making bank transactions online. It has put established banking leaders and their products under immense pressure with easier access for customers to functions like:

The Organization for Economic Cooperation and Development (OECD) also posits that fintech can be leveraged to reduce corruption and money laundering by people, businesses and financial institutions. 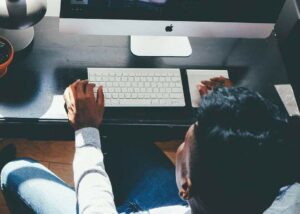 Latin America is now third in the world aggregated mobile usage, behind the North American and European regions.

Worldwide, fintech is already being considered an important part of developing smart cities. The same rings true for Latin American commercial hubs. Latin America is now third in the world aggregated mobile usage, behind the North American and European regions. Though, like elsewhere, governments have some work to do to advance financial regulations in a timely manner to fit the rapidly-advancing industry.

Fintech hubs are surfacing in Brazil, Mexico, Colombia, Chile, and Argentina. Mexico and Brazil, in this moment, are nurturing the largest fintech ecosystems in the region. Mexico houses 394 fintech startups, with Brazil following closely at 380.

These institutions are targeting what experts refer to as the ‘unbanked’ and ‘under-banked’ populations – the millions of people in local communities who do not own a bank account. Outside of commercial centres, rural or less-developed populations have more difficulty accessing the internet and may sell produce and crafts through cash or bartering, instead of formal bank transactions.

With 626 million people spread across Latin America, there is an opportunity to boost mobile and/or electronic engagement with financial services to a large and growing consumer market.

Mobile usage Latin America is increasing with the economic growth (and subsequently, households’ disposable wealth) of regional powers. Smartphone owners in the region reached 61% of the collective population in 2017. The Association for Private Capital Investment in Latin America (LAVCA) predicts this number will increase to 76% by 2025.

Fintech startups have the chance to grab the attention and business of an increasing number of people. Market observers predict that mobile traffic will increase to 8 times its current rate between the years 2015-2020. Wealthier communities can now pay for convenience and connectivity, and that’s what they’re demanding.

Naturally, the type and number of mobile payment options on offer is set to grow with increased smartphone usage. 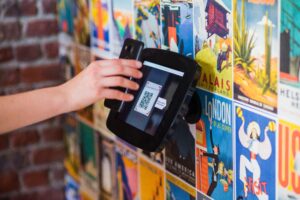 QR code payments, popular in Asia, are now trending in Latin America. The MercadoPago online payment system is experimenting with this method.

QR code payments, popular in Asia, are now trending in Latin America. The MercadoPago online payment system, launched by the Argentine multinational MercadoLibre, is experimenting with this method. Already, the online retailer – popular throughout Latin America – offers several secure payment methods for customers, transacting 138.7 million payments in 2016. PayPal has invested around US$750 million in the company, demonstrating the acknowledgement for MercadoPago’s ongoing success and potential in Latin America.

For blockchain users and loan-seekers, Argentina’s Ripio Credit Network allows its buyers and sellers to make cryptocurrency transactions from their mobile wallets, including lending currency.

Digital challenger banks are also known as neobanks. They’re banks that operate 100% online, allowing people to access and transact funds, and even use a ‘mobile credit card’ without ever needing to establish a formal account in a local branch.

Nubank is one such example of these banks that is growing in popularity. Currently moving through Mexico and Brazil, the company offers people the opportunity to open savings accounts and conduct their financial business completely online. Its free mobile credit card has been requested by around 13 million people. Like Nubank, Mexican company Albo allows customers to connect to the Global Mastercard network and pay bills through its online application.

The development of these and other digital challenger banks in untapped regions in Latin America is key to fintech inclusion; through these easy-to-access services, they’re leading the way in bringing the under-banked and unbanked online.

E-commerce is skyrocketing in Latin America, led by Brazil. The country’s online shoppers account for 42% of the region’s business-to-consumer retail transactions. By 2022, Brazil’s online retail scene is expected to increase by 39%.

Mobile wallets or eWallets allow customers to keep a digital credit card handy for fast, automated purchases. Apps such as Allied Wallet and Mercado Pago offer secure means for people to save their account details on their phone.

With fintech startups and well-established banks taking notice of the potential to reach out to more people, there’s ambition to incorporate the unbanked and under-banked communities of Latin America.

Additionally, those in the region at the lower end of the scale in terms of fintech innovation and startup activity equally support millions of unbanked and under-banked households and income earners. There is potential for first movers to deliver financial technology solutions to new markets. Late-blooming fintech economies will, in the immediate future, also seek to empower people and give them a greater sense of agency over their finances and financial options.

We can help you get started

There is a wealth of opportunity in Latin America to bring millions into the fintech fold. However, it’s important to be aware that while financial technology and innovation is developing at a rapid pace, government policymakers are struggling to keep up. There are still many regulatory requirements you’ll need to navigate when entering the region’s fintech market.

While the progress of respective governments varies and is hard to project, we can certainly help with the here and now. Biz Latin Hub offers a full suite of market entry and back-office services, customizable to your business needs when expanding into Latin America.

Our friendly, professional teams are based in 13 countries (including, most recently, Australia), and are ready to help. Contact us at here for personalized guidance to ensure your commercial success.