As expected, Ecuador has been the most recent nation to join the unstoppable bandwagon – the medical cannabis industry. The Ecuadorian National Assembly passed legislation to approve the production, commercialization, use, and consumption of cannabis for medicinal or therapeutic treatment on 17 September 2019. This makes Ecuador the fifth Latin American nation in quick succession to legalize medicinal cannabis use.

Legislation for cannabis in Ecuador now removes hemp from the list of prohibited plantations and approves the use, production, and marketing of medicinal cannabis.

The pre-existing law on cannabis in Ecuador permitted personal consumption and allowed people to carry up to 10 grams for personal use. However, the production and sale of cannabis were illegal.

On the medicinal front, there was already a reported clandestine medicinal cannabis industry. A law change was first proposed to the National Assembly in 2016 but due to the law only being in early stages of trials in Uruguay and little proof of its potential uses existing at that point, politicians were hesitant to take the leap.

The obstruction the Ecuadorian Parliament needed to overcome was the Organic Health Code (COS), more specifically, Article 340. Scientific proof needed to be presented that would overturn this precedent that cannabis had harmful effects if consumed. Having now debated the topic in the National Assembly in the Tuesday plenary, 83 votes were cast in favor of the law change, 23 against, and 23 abstentions.

The law now removes hemp from the list of prohibited plantations and approves the use, production, and marketing of medicinal cannabis. Ecuador has defined medicinal or “non-psychoactive” cannabis as the dry weight product with a tetrahydrocannabinol (THC) content of less than 1%. Rather than the plant being sectioned under the Ecuadorian Organic Integral Criminal Code, it is now fully registered as a crop under the National Agrarian Authority. To administer cannabis in Ecuador, the government has asked doctors to gauge the patient’s needs. Doctors have been given strict guidelines for administration. 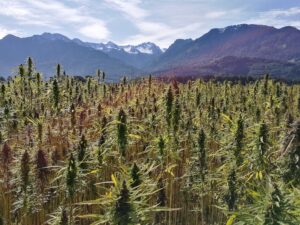 Much like its regional neighbors of Colombia and Peru, cannabis in Ecuador has a number of environmental advantages when it comes to agricultural activity. It is close to the equator, giving it minimal seasonal or temperature change. This allows year-round cultivation, and by following the 6-week cycles of a typical cannabis plant, the ground turns around close to nine harvests per year. Colombia, Uruguay, and Chile have considerably higher crop yields than those in North America. Similarly, Ecuador is famed for its rich, fertile soil. Much of its land was formed from volcanic activity, producing wonderfully fertile prairie soils with dark surface layers, rich in organic matter.

As a percentage of GDP in Ecuador, agriculture makes up a large 10%, more than any other Latin American nation. A large primary sector demonstrates there is a large skilled but cheap agricultural workforce ready to take on the cannabis cultivation.

On top of its environmental benefits, Ecuador has strong exportability. Already with a well-established trade deal with the USA (the largest cannabis consumer market), Ecuador, with its large coastline and number of ports, is primed to be an export giant in cannabis.

Cannabis businesses: what to do now?

There is, of course, a burning incentive for cannabis businesses to be first to market and build a business as soon as possible. However, there is yet to be a legal framework built for businesses to start up. It will be an on-going process in which Ecuador will go through consulting with other Latin American cannabis nations and legal experts to determine the foundation for businesses. In the meantime, prospective investors should prepare their business plan and market entry strategies. Consulting with lawyers and market entry companies could help to streamline your plan, order legal affairs and help give you the early mover advantage.

Be the first to operate in Ecuador

There is a lot of speculation as to who will be the next nation to legalize medical cannabis production. We’re keeping our finger on the pulse to assist all first movers willing to take advantage of these sweeping reforms that favor business opportunities for cannabis in Ecuador.

Looking to get started in Ecuador’s cannabis industry? We work across all Latin American countries that are paring back their cannabis legislation, assisting businesses with their market entry and back-office needs to start operating in this exciting industry. And you could be next!

Get in touch at [email protected] and get a customized consultation on your legal and accounting market entry needs so that we can ensure your company’s smooth formation and integration into this exciting industry.