What are the Opportunities in Andean Latin America?

The Andean Community (CAN) is a South American Customs Union which is comprised of Bolivia, Colombia, Peru and Ecuador; consisting of over 100 million inhabitants living in an area of almost 5,000,000 Sq. Kms and with a combined GDP of approximately US$1000 billion.

Bolivia is the smallest country within the Andean Community, both by geographic size and economic capacity, with a National GDP of approximately USD$33.2 Billion (2015). In the most recent “Doing Business 2016” report, the country was ranked as the (157) best country for doing business (the lowest within the CAP). Key national industries include mining (silver, gold), mineral processing (tin), petroleum, agriculture, textiles and jewelry.

Colombia – The Entrepreneur of Latin America

Colombia has the largest economy within the CAN, with a national GDP of over USD$292Bn (2013). The country has experienced sustained economic growth in recent years, despite a continuing internal armed conflict. It is the only country in South America with coastlines on both the Pacific Ocean and the Caribbean Sea; making international trade a viable option. In the most recent “Doing Business 2016” report, the country was ranked as the (54) best country for doing business. Key industries include food processing, flowers, textiles, mining (gold, coal, emeralds), petroleum and chemicals.

Peru is continuing to enjoy the benefits of a strong and expanding extractive industry sector, with the national GDP reaching USD$189Bn (2015). The country is the third largest in South America, and is borders the South Pacific Ocean, between Chile and Ecuador. In the most recent “Doing Business 2016” report the country was ranked as the (50) best country for doing business (which is the highest ranking within the Andean Community). Key national industries are petroleum, natural gas, mining (gold, copper and base metals), fishing, textiles, steel and heavy metal fabrication.

Ecuador and the Andean Community 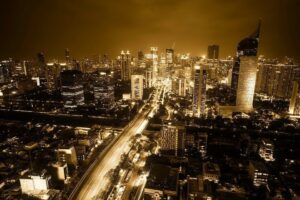 Economy is a small economy with a GDP of approximately USD$100Bn (2015). The Ecuatoriano economy is heavily reliant on the petroleum industry, which now accounts for over 50% of the national export earnings and almost 25% of government revenue. Interestingly, Ecuador has chosen to use the U.S. dollar as its official currency. In the most recent “Doing Business 2016” report the country was ranked as the (115) best country for doing business. The key national industries are petroleum, food processing, agriculture (bananas), textiles, chemicals and wood products.

In 1993, a free trade zone was established between the CAN that now means 100% of all goods of Andean origin are duty-free within the region (with some conditions). In addition, there are common tariffs and duties for all goods imported from outside the community. Additionally from 2005, all citizens of member countries can travel freely within the Andean Community without a visa and can enter member states by only presenting their national ID cards.

If you are planning on forming a company in Latin America and want advice on how to do so, click on the “Company Formation” link below and to learn the basics. If you have further questions regarding investment in Latin America, please get in touch with Biz Latin Hub; speak to our Market Entry director, Andrew Wright here.