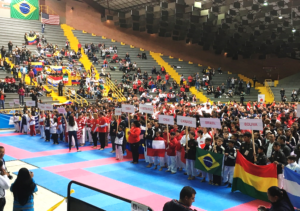 During August 9-11, over 600 people traveled to Bogotá, Colombia, from 16 countries to compete in the 2019 Panamerican Karate Championships.

Karate is a sport that’s blossoming in Latin America – but importantly, the discipline goes beyond training to fight, and teaches its practitioners a set of values they can apply in other aspects of their lives. Biz Latin Hub’s Chairman David Wright and Senior Legal Counsel Andres Vargas are heavily involved in the Japanese Karate Association Colombia. This month we shared their passion as sponsors for the 2019 Championships.

We had the privilege of connecting with Sensei Inoue and Sensei Armando, organizers for the Panamerican competition and key mentors in the Japanese Karate Association in Japan and Colombia, to talk about the championships, the history, and future of karate in Latin America.

Karate in Latin America – The Evolution

How did karate first come about in Latin America? How is it popularizing?

Sensei Inoue: In the beginning, it did not start with karate as a whole. At first, only small things from karate were being taught. The principle objective started with health and taking care of yourself. It started with a very small group, and from there it expanded. As it expanded it was formed as a system of sports from which kata (a series of movements practiced alone or with a partner which does not involve fighting). It was a demonstration of the technique of karate, which was done without hitting. Little by little, this expanded to universities.

People thought that karate was a bad thing, that it was all about fighting and was only used by gangs. Of course, this is not true about karate. So, through the universities, here, the image of karate was changed, there was a transformation in the perception of karate.

The internationalization of karate came through the help of Kano Jigoro, the founder of judo who taught foreigners Japanese martial arts. To help export karate to other countries, karate adopted the grade system from judo, which uses belt colors. As well as this, karate as a martial art was formalized so that there would be a teaching-based system, so others could learn it easier.

In old times, during the Samurai government, it was prohibited to own weapons as a way to control people. Since there were no weapons, people started to learn karate as an act of self-defense. After the second world war, when people went back to their countries, they started to teach karate to students.

How are events such as the Pan-American Karate Federation Championships set up?

Sensei Armando: We try to provide a proper space for children to show their strengths and everything they have learned with people from around all the world.

How important is it to hold events such as these? 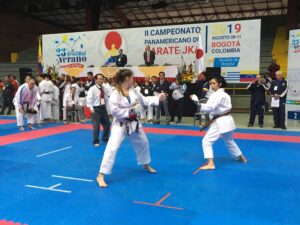 “It is important for people at this event to learn about respect. And through practice, in the lead up to this event, they learn how to be confident.”

Sensei Inoue: The most important thing is to teach them about health, at the very least. Equally, it is important for people at this event to learn about respect. And through practice, in the lead up to this event, they learn how to be confident.

Sensei Armando: It can get very competitive, but through events like these the coaches are coaches and nothing more! There is no hierarchy as such and everyone is treated equally.

How important is it for a sponsor such as Biz Latin Hub to help hold such events?

Sensei Inoue: We welcome sponsors very much. To set up big events like this, to give opportunities to the kids and older competitors it takes a lot of time, effort and money. If these sponsors share this idea – our idea to do this – we are very happy to welcome their support.

The bigger the event in getting more people involved, the more time money and effort it takes to set these types of events up. Of course, these events can only go ahead with collaboration and support from good people and good organizations.

Sensei Armando: Yes, what is meant by good organizations is if the organization shares the same philosophy, the same good interests then we are very happy to welcome them in collaborating in events set up by our association.

How did you two first get involved in karate? 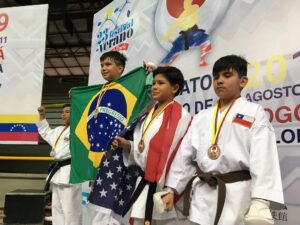 “The athletes of today will need to practice day by day in order to learn the karate at their best, so that they themselves can be masters.”

Sensei Inoue: My brother did karate and so did my neighbor. From them, I started to learn karate.

Sensei Armando: One day a teacher sat down with me and said: “Hey, tomorrow we’ll practice karate, bring sportswear”! And so I went, and I loved it.

Where do you see Latin American karate in 10 years?

Sensei Inoue: This will depend on future karate masters (teachers). The athletes of today will need to practice day by day in order to learn the karate at their best, so that they themselves can be masters. They have a lot of potential; they can grow and have so much more to learn.

It is about preparing future masters all over the world.

We support foreign businesses and entrepreneurs move into the Latin American and South Pacific regions. By sponsoring the Panamerican Karate Championships, we support integration not only in business but in people-to-people connections as well.

It’s important to us to reach out to our community and promote social connectivity. Sporting events such as the Panamerican Karate Championship, and the 2019 Rugby4Peace programme by Fundación Buen Punto, share valuable principles that Biz Latin Hub stands behind.

If you’re considering a move into Latin America’s sports scene, we can help. Company formation rules and regulations differ across this diverse region. Our local legal and accounting teams offer a full suite of market entry and back-office services to see you through the initial steps of your expansion.

Contact us today here for more information and our personalized business solutions that we can offer you.