5 Booming Sectors in Mexico for Business

Mexico is a country with a constantly growing economy. After a slight decrease in annual GDP between 2014 and 2016, it has grown at an annual rate of between 2 and 3% each year from since. This productive country has the second-largest economy in Latin America.

The Mexican economy has certain strengths to claim: first, their proximity with the United States makes them privileged trade partners, especially in uncertain times of global trade conflicts. The country can rely on strong trade agreements, including the new USMCA agreement with the USA and Canada, but also OECD, the G20, and Pacific Alliance.

We explore 5 growing sectors that currently pose significant commercial opportunities in the Mexico market. Consider your investment options for entering the market and start your business in these lucrative areas.

Mexico is the second-largest market for fintech startups in Latin America, with an impressive yearly growth of 40%. Leader of Mexican startups market includes Linio, Sr.Pago and Corner Shop (Chile-Mexico). Between 2017 and 2022, Mexico’s fintech market is expected to double, reaching a value of US$68.2 billion.

Latest figures found the Fintech sector in Mexico show the country houses 515 companies currently. There’s an estimated revenue volume of about MX$68.409 billion (approximately US$35.03 billion) connected to this development. The market is buoyant and contains strong potential. Today Mexico is the Latin American country considered to be the most dynamic and with the highest level of technological development.

This ecosystem has created about 3,600 direct and perhaps as many indirect jobs. According to Entrepreneur.com, 80% of new companies are now operational and 48% of them are in growth/expansion.

It is estimated that the influx of technology business start-ups in Mexico has the potential to grow the country’s economy exponentially. Currently, only 0.5% of Mexico City’s GDP is allocated to R&D, but in view of the latest estimates, this percentage should also increase drastically. This growth carries a ballpark value of more than US$245 billion by 2025, for cumulative GDP. The sector is supported by the new government of Andrés Manuel López Obrador (AMLO), with a development of a legal framework to facilitate fintech development.

Manufacturing industries, according to World Bank data, represent 17.1% of GDP and 15.8% of the national economy. With 43.4% of foreign direct investment (FDI), the sector is the largest in the country. These industries grew by 1.3% during the year. FDI is driven upwards by the automotive and aerospace manufacturing industries.

The aerospace industry has been, and continues to be, one of the government’s top priorities for the country’s economic development. Mexico is fourteenth in the world ranking of the industry. Although rather young, the industry has been growing in recent years, but also in terms of attracting FDI and creating jobs. The Ministry of Economy estimates that the sector generated a total of US$8 billion in 2017. It is currently estimated that the industry employs more than 40,000 people, with a total of 330 companies operating in 18 states. Exports in the sector are expected to reach US$8 billion by 2020.

In terms of FDI, according to Agencia Espacial Mexicana (AEM), Mexico is considered the third-largest recipient in the world, just behind the United States and the United Kingdom. With an annual investment of US$3.06 billion in 2017, an increase of 2% over 2016.

The government has put in place a strategic program, Pro-Aereo, to position Mexico as a member of the ten global exporting countries. This program focuses on the development of technology and human capital. The Ministry of Economy created the Aerospace Advisory Council, composed of representatives of industry, academic partners, and related government agencies. The objective of this committee is to promote FDI and the development of all actors in the sector.

Mexico’s manufacturing industries will move from strength to strength, with growth expected to reach 1.1% in 2019 and a near 1.7% increase in 2020. Mexico’s manufacturing has been just as broad and includes consumers products, aeronautic and, most prominently, automotive industries. Automotive manufacturers contributed to an increase of 7.1% of employment during the past year following to an increase of 5.7% of the average salary in the sector. FCA, Ford, Toyota, General Motors, Mazda, Honda, and VW Group, are the leader of the Mexican automotive market.

Aerospace and automotive industries are likely to experience strong growth in the coming years, thanks to the refreshed trade agreement with Canada and the US, USMCA. With a workforce that is cheaper than the other two stakeholders, Mexico is an ideal commercial solution for North American businesses looking to reach Southern American markets

Mexico is in the process of taking steps to legalize cannabis. The AMLO government is implementing various actions to prepare this legalization following strong public interest, health rules and human rights.

Following various Senate committees last August, the nation’s Supreme Court of Justice requested the Ministry of Health to publish recommendations for the medicinal use of cannabis within 180 days, to start to raise public awareness.

There is a high acceptance of introducing a legal framework for cannabis in the country, reflected in a survey conducted by the Secretaría de Seguridad y Protección Ciudadana Cuenta via Twitter. The survey asked about public opinion the legalization of cannabis, and 81% of the responses were pro-legalization.

If Mexico decides to legalize cannabis, the market could reach $12 billion by 2029. Taking into account the demand for cannabis containing less than 1% THC, these figures multiply. Foreign entrepreneurs and investors are preparing for a possible law change by the end of 2019. Indeed, if the Mexican market reacts like other Latin American countries who have already taken the step, taking market share quickly may seem attractive. 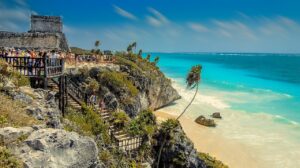 The areas favored by the real estate sector are concentrated mainly in Mexico City (CDMX). However, also in Tulum City, which is considered one of the best places to invest in Mexico

Investing in Mexican real estate is one of the best options to make your money grow. Real estate taxes paid in the country are lower than in European countries such as the United Kingdom, for example. Real estate opportunities are all the more attractive for foreign investors because it is not necessary for them to have a resident or work visa to invest in this market. This guarantees greater flexibility for investors to manage their real estate.

The real estate services sector is one of the most promising sectors for the Mexican economy with no less than 11.1% of the country’s economic activity. With a continuous increase, it reached 2.1% over the financial year from the end of 2018 to the beginning of 2019.

According to the January newsletter of the Mexican Association of Real Estate Professionals (AMPI), the sector is expected to grow by about 17% in 2019. However, this figure may change as we cannot yet measure the impact that the new government will have on the market. On the same report, we can see that the construction industry is ranked second in the ranking of sectors favored by foreign investors, with 12.1% of the country’s foreign direct investment.

The areas favored by the real estate sector are concentrated mainly in Mexico City (CDMX). However, also in Tulum City, which is considered one of the best places to invest in Mexico, as it guarantees a constant flow of tourists and prices that are still affordable and have high growth potential. Playa del Carmen also has exciting opportunities in the real estate sector, with its carnival and 12 million tourists in 2018. This city enables homeowners to rent their properties when the hotels are full. The emergence of applications such as Airbnb has helped to drive up the value of real estate in these areas.

Investing in real estate is a more or less critical risk-taking depending on the sectors and the place where you spend. However, it is one of the safest long-term investments, with property values continuing to increase over time.

Mexico is the second-largest country of Latin America in terms of population, and it’s still growing. With a current population of 127,819,469 habitants, and ethical trade agreement, and partners, it’s an excellent opportunity and environment for your business.

If you’re looking to incorporate into Mexico, we recommend consulting a local expert on the process. At Biz Latin Hub, our team of local and expatriate professionals provides customized business solutions to ensure your success entering a new market.

Reach out to our friendly Mexico team today via email at [email protected] for personalized support for your expansion.