Export Opportunities from Panama to the Rest of the Americas

Panama has an average GDP growth rate of 5.4% over the last 5 years, making it one of the fastest-growing economies in the region. Much of this is thanks to its vast expertise in the maritime industry. Of course, being home to the Panama Canal, its fantastic geographical location, and one of the largest ports in the world, Panama prides itself on being an export master.

Access to both the Pacific and Atlantic Oceans alongside being located directly between North and South America permits Panama to directly export and re-export roughly USD$32 billion worth of goods every year to every continent. There are few nations better-positioned to do such wide-spread international trade.

Although Panama’s export of goods and services as a percentage of GDP has fallen by 20% since 2010, it still remains very high at 44%. We explore export opportunities in arguably the most strategically located and facilitative countries in Latin America.

What do they export?

Where do they go?

The vast majority (64%) of Panamanian direct exports (exports of goods originating from Panama) go to Latin America and the Caribbean. 24% is sold to North American importers with only 4% each going to Europe and Asia.

The Colon Free Trade Zone (CFZ) is the second-largest free-trade zone in the world, trailing Hong Kong. It is located in the area around the city of Colon, on the Atlantic entrance to the Panama Canal. The area occupies 2.4 square kilometers and generates close to $USD20 billion a year in imports and re-exports. The CFZ was set up in 1948 to generate further income and expand the country’s services sector.

The Colon Free Zone allows companies to save money by avoiding many tax obligations (in Panama) related to their commercial activity. These tax benefits include:

Within this area, companies can store, display, condition, pack, unpack, split shipments, assemble – more or less performing all activities related to the handling and distribution of goods. 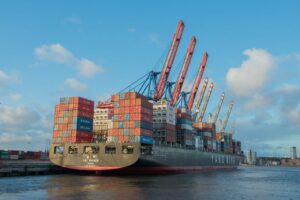 The CFZ is split into 9 segregated areas – the most famous being the ‘Casco Viejo’ where many large multinationals locate company showrooms. France Field is another famous area located in close proximity to two major container port terminals. The other seven free zone areas contain major distribution centers for the likes of Huawei, Sony, and HP. The whole zone provides a hub for transport links around the world. Within the CFZ, are three major seaports, the Panama railroad, the Panama-Colon highway, and the Enrique Adolfo Jiménez Airport. This network of transport links serves as the most extensive nucleus for international trade and distribution over the entirety of North and South America.

The benefits of operating in the CFZ do not just stop at tax/financial reasons. Secondary benefits of conducting business in the zone include saving time, growing sales and reducing complexity. By using the CFZ as a re-exporter hub, wholesalers can avoid traveling to all Latin American countries to review export prospects, talking with numerous distributors and merchants. Instead, they can approach Panama and discuss a single deal for a continent-wide distribution program. On top of this, retailers can use the zone to grow their sales. By scheduling visits to the CFZ, they can buy produce in wholesale form without many of the usual tax implications due to being a duty-free zone. The wholesale produce can then be sold at a higher margin and therefore boosting retailers’ profits. With the CFZ having three of largest ports of in the world, they have links with close to every transshipment port in the world, meaning that by distributing from the CFZ, companies can access every country around the world directly without complex transfers from other ports. This significantly reduces complexity for businesses and reduces shipping costs.

How to operate your business out of the Colon Free Zone

There are three ways in which businesses can operate from the CFZ:

Panama as a re-exporting nation 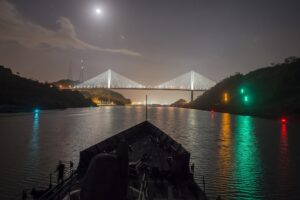 The Panamanian Ministry of Commerce and Industry promotes exports and investment.

Thanks to the strategic positioning of their Canal conjoining the Atlantic and Pacific Oceans, Panama has one of the strongest re-export industries in the world. Countries such as Hong Kong, Luxembourg, and Singapore all conduct similar operations as a result of their similar maritime expertise. Panama, particularly in the food industry, collect produce from predominantly Latin American nations to re-package and distribute. This has significantly helped agribusiness all over Latin and Central America, giving the industry a more reliable outsource.

How to export out of Panama

The Panamanian Ministry of Commerce and Industry promotes exports and investment. It facilitates the processing the export documentation through a ‘One Stop’ office, which significantly reduces the exportation bureaucracy, taking the whole process down to a few hours.

To use Panama as an exporter or re-exporter, as countless successful companies do, you must provide customs authorities with various information. The process has been made deliberately transparent to encourage businesses to settle there.

Looking to export out of Panama? Get in touch.

Panama is one of the most strategically-placed nations in the world for trade and, on top of that, has some of the most competitive tax rates in the world. This makes Panama a highly investible country which is further proven by its rapid GDP growth rate over the last 10 years.

Many describe Panama as the gate to Latin America and it is not only physically but also in business. An export deal with Panama opens up endless shipping and export possibilities with all Latin American nations.

For more information on incorporating an export business in Panama, get in touch with us here at Biz Latin Hub. Our team of accountants and legal experts offer personalized market entry strategies and back-office support to ensure your expansion into this thriving market.