The longest country in the world, Chile, starts to gain the attention of more and more tourists every year. With the coastline longitude of more than 4,000 kilometers, all regions of Chile provide a great variety of landscapes to local and foreign visitors. The north of the country is famous for its vast sandy mountains and salt lakes in the Atacama Desert. The national park Torres del Paine, in the south, attracts travelers and adventure-lovers seeking immense glaciers, green forests and blue lagoons. Not to be forgotten, the Chilean countryside is marked by the incredible Andean Mountain Range spreading alongside the entire country. 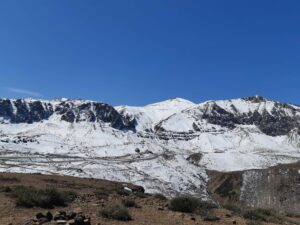 Travel and Tourism formed approximately 10% of the country´s GDP in 2017.

During 2017 alone, almost 7 million people visited Chile, representing an increase of 13.3% in comparison to the previous year. Travel and Tourism is one of the fastest growing sectors and contributed to more than 10% to the global GDP. In addition, the existence of more than 800,000 jobs was directly and/or indirectly supported by the tourism sector. Illustrated in total amounts, more than 10% of all jobs in Chile are connected to tourism. The great touristic potential was noticed also by Lonely Planet which declared Chile as a top travel destination for 2018.

Chile is a country full of heterogeneity. This can be seen also in the distribution of the population. More than 40% of the total 17 million inhabitants live in the Chilean capital- Santiago. Santiago is situated directly in the middle of Chile and thus its central position it became an important logistic, business, and educational hub. One of the most visited tourist destinations in the region, Cajón del Maipo, is located only 30km southeast from Santiago. It is a popular weekend destination for local and foreign travelers who want to escape the urban city life and prefer to enjoy breathtaking views on the snow-capped Andean mountains. The mountain valley at the altitude of 3,000 meters is home to an Embalse el Yeso which is a turquoise water reservoir. Through the mountains flows the Maipo River which is the main source of potable water for Santiago´s residents. The Maipo region is Santiago´s largest natural area and provides unique sports opportunities such as hiking, rafting, skiing, cycling or horseback riding. 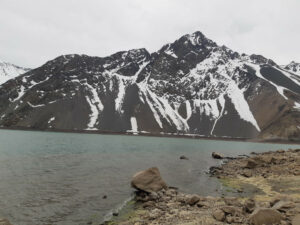 Cajón del Maipo is one of the main tourist attractions located in the suburbs of Santiago de Chile.

In the mountainous areas of San José de Maipo are situated five run-of-the-river hydroelectric plants out of which four are owned by the American-owned electric company AES Gener. In November 2018, the AES Gener company confirmed progress in the construction of the Alto Maipo Hydroelectric project which should double the current generating capacity. The Alto Maipo project sparkled a lot of controversy and protests around Chile. The massive construction next to the Cajón del Maipo would give temporary employment to around 2,500-4,500 workers for approximately 4 years. It is projected that only around 200 of these jobs would be recruited from the local workforce. After the complementation of the construction, the permanent number of employers would sink to 50.

The complete construction of the hydroelectric project would require cutting roughly 70 kilometers of tunnels through the Andes mountains making it one of the largest hydro-tunnels in the world. In addition, the project would require the construction of a vast system of underground tunnels which would divert a large percentage of the water from the Maipo river. The Maipo river is the main river flowing through the Santiago Metropolitan Region and the Valparaiso Region.

Many Latin American countries, including Chile, are forecasted to battle the water scarcity in the coming years. At present, water shortage already presents a problem for Indigenous people and people living in the northern regions of Chile. The main causes of water scarcity in Chile are especially the gigantic mining industry, lack of water management regulations, river contamination and drought. As per the studies revealed by the University of Chile, the Alto Maipo hydroelectric project could represent a threat to the water supply in the Maipo river.

The principal provider of potable water in the urban areas of Santiago´s Metropolitan Region is Aguas Andinas. It is a private company owned by a multinational conglomerate Agbar-Suez. It owns approximately 25% of the consumer rights in the first section of the Maipo River. Before the approval of the Alto Maipo project in 2009, Aguas Andinas was one of the main opponents of this project. They claimed that the hydroelectric construction could pollute and threaten the local water source. The resistance of Aguas Andinas was one of the greatest obstacles of Alto Maipo project construction. However, in 2011, it got to the light that Aguas Andinas signed a secret contract with Alto Maipo which was not released until forced by court order in 2013. The contract stated that Aguas Andinas would provide Alto Maipo with 2.5 cubic meters of water per second from two large water supplies in exchange for monthly payments over a 40-year span.

The Future of Cajón del Maipo as a Tourist Destination?

Signing a contract with Aguas Andinas removed the major obstacle in the project construction. The Alto Maipo project caused a wave of protests organized by Santiago´s residents, local activists or NGOs. The Chamber of Tourism of the Cajón del Maipo expressed their disagreement with the construction of the Alto Maipo project, condemning it for deforestation and presenting a threat to potable water. Despite the public disagreement, in November 2018, the AES Gener confirmed that the would make progress with the Alto Maipo project construction. The future of the Cajón del Maipo is now questionable. For years, Chile has been trying to balance the extraction of its vast natural resources and the sustainability of the affected regions.

It is still to be expected how the Alto Maipo project will evolve and what impact it could have for the local tourism. We can only hope that the local authorities will not overlook the long-term benefits and opportunities which the sustainable tourism in the region Cajón del Maipo brings.

For more resources on doing business in Chile and Latin America, please fee to visit our website.