Mining Lawyer: What Are the Investment Opportunities for Lithium in Chile and Argentina?

Lithium is a metal that is commonly used for the production of batteries for electric vehicles (EV) and as electric vehicle sales are booming, demand for lithium is increasing rapidly with it. This is good news for Argentina and Chile, two powerhouses in the global lithium industry. These countries comprise some of the most lithium rich areas in the world and the prediction is that this trend of growing lithium demand will continue in the coming years. Therefore, in this article, we will have a look at what influence this trend has on the lithium industry in Chile and Argentina, and which possible opportunities might arise in these markets.

What is Driving the Growing Lithium Demand?

Where in the past lithium demand mostly depended on smartphones and laptops, nowadays electric vehicles are boosting the demand for lithium more and more. Electric vehicles require as much as 4,800 times more lithium than a smartphone. The popularity of electric vehicles has risen rapidly in the past years and this trend is only expected to continue in the future. Many governments, like the UK for example, introduced plans to eliminate combustion engine vehicles as part of the global movement to combat climate change. As well as a rapid increase in demand, these measures help towards ensuring a long-term demand for lithium. This prediction is shared by Elon Musk, CEO of Tesla, one of the biggest producers of electric vehicles in the world, who is looking to source lithium in Chile in anticipation of the expected rise in lithium demand.

Some critics say that the increase in supply will cause a drop in prices. However, specialists argue that due to the size of the demand and how difficult it is to mine lithium, demand will continue to outstrip supply. Analysts expect lithium demand to reach 775,000 tonnes in 2025 compared to the 175,000 tonnes of 2015. Also, they expect a supply shortfall of 100,000 tonnes of lithium by 2025. These developments will certainly provide many opportunities for investors in the future. 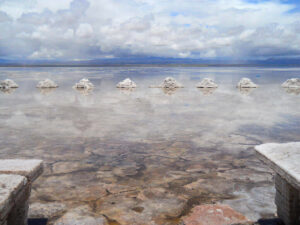 Lithium rich salt falts can be found in Argentina Bolivia and Chile.

Currently, Chile is the second biggest lithium producer in the world producing 70,000 tonnes of lithium a year, beaten only by Australia with 76,000 tonnes. Chile’s lithium reserves are mainly located in its lithium rich salt flats. These flats are located in the Atacama Desert and are also present across the border in Argentina and Bolivia. The high-quality lithium in this area is extracted from lithium brine deposits. This differs from other parts of the world where, for example, in Australia, most lithium is extracted from hard-rock mines. However, extracting lithium from hard-rock mines is much more difficult and costly than extraction from brine deposits. This enables Chile and Argentina to benefit from much higher profit margins for its lithium.
Although lithium extraction in Chile is heavily controlled by the government, it is now looking to expand its production following increasing global lithium demand. Also, the election of the business-friendly Piñera will give a boost to the country’s lithium industry. Piñera is considered to be very supportive of the mining industry and it is expected that under his government the strict regulations regarding permits for production and export will loosen up. These expectations are given further support by the fact that, soon after Piñera’s inauguration, a permit to produce and export lithium was granted to Minera Salar Blanco (MSB), a joint venture owned by Australian, Chilean and Canadian firms.

Argentina: Ready for Big Growth in the Mining Industry 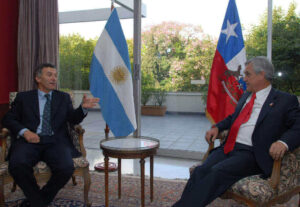 The policies of both Piñera and Macri are believed to stimulate the Lithium industry.

Argentina currently produces 30,000 tonnes of lithium a year making it the 3rd biggest lithium producer in the world. However, it has big plans for increasing its lithium production. The main reason behind this development is political and the new Macri government is, similarly to Piñera, considered to be business-friendly. Macri, who is opening up the country up to foreign capital, has stated that the development of the lithium industry will be a priority. Macri’s government has already implemented some policies that have had a positive effect on the lithium industry. For example, Macri’s government has ended an export tax on mineral products and ceased a ban on companies sending profits earned in Argentina back to their headquarters. These measures seem to have been successful and, since Macri took office at the end December 2015, Argentina has been receiving more investment into its lithium industry than neighbouring Chile. In the near future, Macri expects that eventually, Argentina will have the conditions to produce half of the world’s lithium.

However, there is also one problem. Lithium mining is very different and complicated compared to other mining activities and, as a result, there is a shortage of qualified local workers. On the other hand, this opens up opportunities for foreign players to bring their expertise to Argentina and fill the gap.

Want More Information on Lithium and Mining in Latin America?

Latin American countries are some of the world’s biggest commodity exporters in the world and as a result, there are a large variety of opportunities for business and investment in Latin America. However, doing business in Latin America can be difficult due to various legal and cultural factors. At Biz Latin Hub we have a team of local and expatriate mining specialists that offer services which can assist companies in overcoming these difficulties and making their business venture a success. If you want to know more about the services we offer, send an email to Craig here to find out more.

Watch the video below to find out more about mining opportunities in Latin America!