Fun is big business. Various forms of entertainment are prolific in every country the world over, and there’s great opportunity in this industry. Entertainment attracts a lot of investment and consumers invite new and innovative entertainment options to their cities, raising the likelihood for success for new products and services in this area.

We explore the Australian entertainment market, its ability to attract foreign investment, but also the influence it can receive from its booming tourism sector, and permanent migration numbers. The future of this industry in the Australian economy is bright, and a key opportunity for commercial success.

Australia presents an annual expenditure of AU$40 billion (equivalent to US$26 trillion) on entertainment, which is an exceptional figure.

The Australian economy has been growing steadily for almost 26 years and is one of the few that survived the 2008 financial crisis without experiencing serious economic impacts. The GDP growth rate was 3.2% in 2018, one of the highest in the developed world (US$1432.20 billion) and the thirteenth-largest economy in the world.

According to the Australian Treasury, GDP will continue to grow in 2019 and, 2020, with estimates of 2.8% and 2.7% growth respectively. Australia is the twentieth-largest exporting economy in the world, with US$243 billion exported in 2017.

Driven by strong energy, mining, finance and agricultural sectors (among others), Australia is bringing in significant investment inflows with potential for high returns. According to UNCTAD’s World Investment Report 2019, the country is ranked eighth worldwide in terms of FDI inflows in 2018. Over the same period, FDI inflows reached US$60 billion, with a record growth of 43%.

The country’s economy offers its foreign investors individual economic liberalism, stability, and transparency in its legal system. The government has recently made a series of changes to its foreign investment framework by simplifying existing regulations.

Such an enticing business climate and demonstrable opportunity makes the Australian market a preferred location for investment.

The entertainment industry in Australia

Australians enjoy entertainment and consume a lot of it. The country presents an annual expenditure of AU$40 billion (equivalent to US$26 trillion) on entertainment, which is an exceptional figure.

Since the boom in popularity and production of digital content, the industry has never been so important in Australia, with an average annual growth near 2.9% and AU$36 billion (equivalent to US$24.103 billion) generated since 2008.

Australia is considered a center of excellence in the creation of entertainment content, such as film-making, animation, digital special effects, or game design.

The following areas are considered the hot spots for investment in Australia:

Impact of tourism and migration on the industry

Regarded as the tenth-largest tourism market in the world, Australia rakes in a sum of AU$47.5 billion (equivalent to US$31.85 billion) in tourism. Tourism probably influences the country’s economy more indirectly than directly. With nearly 8.5 million visitors, tourist expenditure reached AU$43.9 trillion (equivalent to US$29.44 trillion) in 2018. The industry is doing well and has a bright future. With a 4.7% increase in the number of visitors compared to 2017, it is estimated that there will be 10 million visitors in 2019, and numbers will finally reach 15 million by 2026.

Australia’s large visitor and permanent migrant population places increased demands on the entertainment industry. As a multicultural nation, individuals and communities with diverse backgrounds have introduced new ideas and options to the market, and the country is open to invite more. International film and music festivals, and greater arts scenes in tourist hot spots such as Melbourne have all welcomed creative and cultural innovations. One such example is virtual reality entertainment, debuting in the country only recently, in 2015.

This in turn opens up the industry for opportunistic businesses looking to reach out to Australia’s entertainment consumers in new and captivating ways. 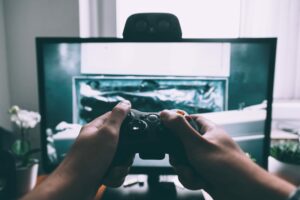 Australians are big video game fans, with an average of 12.5 million video and computer games purchased each year

Future of the industry

The Australian entertainment industry will continue on its strong momentum and set new records. Market observers estimate that the industry would maintain a steady annual growth of nearly 2.1% to reach a market of AU$43.7 billion in 2025 (equivalent to US$29.3 billion).

For the film, music, and video game sectors, overall growth is expected in all three industries. Since the integration of new techniques that make it possible to implement ever-more realistic games and switch them to mobile, there is a risk that sales will explode in the coming years. We are witnessing the continuous evolution of a new industry that promises huge returns for those who are qualified to take advantage of it, so it is crucial to seize opportunities quickly before the market is saturated.

Need for assistance from local experts

You can now see the different characteristics and opportunities to set up a business in Australia, including in the entertainment industry and its various influences. If you feel ready to explore your possibilities, we are here to help you.

At Biz Latin Hub, we have developed effective teams of local and expatriate professionals across Latin America and Australia. To date, we are prepared to support you by offering you our back-office services and thus help you with your project.

For more information, contact us today at [email protected] to discuss how we can best help you.