How Will the 2018 Mexican Presidential Election Affect Business?

Latin America is hosting a marathon of presidential elections in 2018 and last month we gave you an insight into the possible impact of the Colombian election on business in the country. Today, we move on to the next leg of the series and focus on the upcoming elections in Mexico as the race for Los Pinos, the equivalent to the White House in the USA, is getting into its final stages.

The successor of current president, Enrique Peña Nieto, will surely have a lot of work to do as he will be confronted with a highly unsatisfied electorate. Only 6% of the voters are satisfied with the current administration; one of the lowest approval rates in the world! The crime rate has been going through the ceiling since Peña Nieto took over and the country saw its highest murder rate in recorded history in October 2017 and corruption is still a standard practice. On top of this, there is the uncertainty caused by Donald Trump over the future of the North American Free Trade Agreement (NAFTA). The person faced with tackling these daunting issues will be elected on the evening of Sunday 1st July 2018 and currently polls are showing one clear leader.

Who Is Favourite to Win the Mexican Elections in July 2018?

According to several current polls, there are 3 favourites headed by the left-wing populist, Andrés Manuel López Obrador or AMLO who launched the Founding National Regeneration Movement (MORENA) in 2012 after two consecutive failed campaigns for presidency. In 2018, he is now the favourite with 38% of the electorate, leaving the rest behind by at least 11%. The fiery spokesman was mayor of Mexico City from 2000 to 2005 and he has promised to face the issues most important to voters. This includes combating crime and violence and reversing certain reforms implemented by Peña Nieto such as the ongoing privatisation of the energy industry. Furthermore, he promises to reduce poverty by setting low prices for crops to make Mexico self-sufficient. Lopez Obrador has been an outspoken critic of Donald Trump and, with the doubts over the future of NAFTA, he has been a concern for investors and pro-business Mexicans since his rise last year. In fact, investors are already viewing his potential election as a big threat and are holding back on their investments until the results of the elections come out. If he should become elected, there are worries over the collapse of NAFTA and that Mexico may begin a retreat from the international trade that has benefited the country so much in recent years.

Runner-up with 27% of the votes is Ricardo Anaya whose conservative National Action Party (PAN) formed an alliance with AMLO’s former centre-left Party of the Democratic Revolution (PRD) and the small Citizens Movement (MC). Anaya is promising a basic income for all Mexicans in an attempt to appeal to both AMLO’s voters and the core of PAN’s voters. Other initiatives include the establishment of a new education model and the transition from a Mexican manufacturing economy to a service based economy. However, he has left out the details of his plans leaving private investors and companies wondering what new opportunities this will mean for them.

As third most popular candidate is José Antonio Meade with 22% of the votes. He has undertaken roles in government for the opposition and also in the current administration as finance secretary as an independent. The economist from Yale University has held more positions in government than any other current candidate. The mix of experience, good reputation and neutrality impelled Peña Nieto to choose him as the candidate of the Institutional Revolutionary Party (PRI). What sets him aside from his opponents is his vision to transform Mexico into a sustainable international powerhouse mainly by renegotiating the NAFTA terms in order to increase trade between the members. He also plans to triple investment in public transportation and invest roughly 30 million pesos into the generation of green energy. Reforms put in place by Nieto, such as the privatisation of the energy industry will likely be maintained to increase competitiveness and efficiency. If Meade takes office, he will likely be the most typically business friendly president for Mexico in 2018.

How Will Mexico’s Economy Perform in 2018? 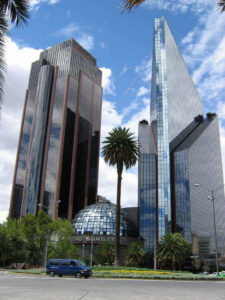 Mexico is predicted to continue its strong performance of recent years in 2018.

Despite the uncertainty caused by the election, economic predictions for Mexico are positive and its GDP is expected to grow steadily at a rate above 2% for both 2018 and 2019 after having reached 2.4% in 2017. This makes Mexico one of the strongest performers of the region as the pro-business reforms of recent years start to bear fruit. In the period between January to October 2017, the total value of goods manufactured and exported by Mexico grew by around 9% and 10% respectively compared with 3.6% growth in global trade of manufactured goods. The telecommunications reform caused the price of mobile broadband services to drop by 75% between 2012 and 2016. Around 3 million jobs were created thanks to the labour reform of the current administration. The energy reform gave the impetus for private investors to invest almost 80 billion dollars into the market and during the first half of 2017 foreign direct investment was 9% higher than during the same period of 2016. All of this progress took place against the backdrop of constant economic threats from the United States and a drop in global oil prices. This is testament to the resilience of the Mexican economy which is expected to continue to grow even if the most business averse administration comes into power after the election in July 2018.

If you want to learn more about the Mexican economy and its business opportunities, at Biz Latin Hub, we have a team of local and expat professionals ready to help you and answer your questions about investing in Latin America. Feel free to contact our country manager, Alex Mahoney, at here to find out more about how we can support you and your business with your back-office needs.

Watch our video below to learn how Biz Latin Hub can help you do business in Latin America!