The United States and China are engaged in an ongoing tit-for-tat trade war. Despite lengthy negotiations, no deal has yet been reached between the United States President Donald Trump and Chinese President Xi Jinping. The war stems from tensions over the United State’s large trade deficit with the Asian powerhouse and alleged Chinese theft of intellectual property. With elections looming, Trump is taking action.

On Monday, China announced tariffs on US$60 billion worth of American exports into China, a reaction to Trump’s tariff hike of 10-25% on US$200 billion worth of Chinese goods. Ultimately, both countries will suffer from reduced exports, shifting investments and a contracting GDP. However, where one region loses, another may win. There is now a new opportunity for exporters in Latin America to take a slice of the Chinese import market for themselves. Read on to find out opportunities in China for Latin American exporters. 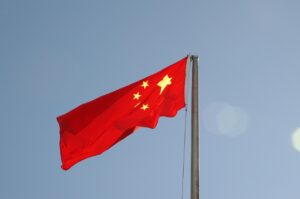 China’s extensive lending and investment in Latin America has been welcomed.

The long relationship between the United States and Latin America has been tumultuous. Extensive American intervention in politics and trade has created a somewhat tense history between the two regions. Trump’s rampage against immigration and trade from Mexico has scared away some Latin firms. China has taken advantage of this history and created alliances founded on its open criticism of the Trump administration.

China’s extensive lending and investment into the region has been welcomed and subsequently, trade between the two regions has taken off. China challenges the United State’s power over Latin America as its own demand for raw materials boosts commercial relations. China is currently the top trade partner of Brazil, Latin America’s largest economy. It also upgraded its free trade agreement with Chile in March 2019 to make 98% of all items exempt from tariffs. A new free trade agreement with Peru is also set to further bolster trade between the two countries.

China’s imports from the United States

Many of these products are now affected by tariffs, or have planned tariff increases on the horizon. With increased tariffs, Chinese vendors and consumers will absorb lower profit margins and price increases if they continue buying these products from the United States. Instead, they will seek lower-priced alternatives from other exporting countries. Here, Latin America can fill the gap.

What Latin America can provide to China

China previously imported large quantities of soybeans from the United States. China’s pig population, which makes up half the world’s total population, is fed by a huge proportion of its soy imports. With hiked tariffs, this demand has shifted to producers in Brazil and Argentina.

Brazil’s soybean exports to China grew 23.1% last year, compared with 2017. It is expected to become the world’s biggest soybean producer in the 2019-2020 harvest season. Argentina’s soy exports are expected to grow 48% this year, compared with 2017. Paraguay is also an important soybean producer in Latin America, producing beans with higher levels of protein than other countries. 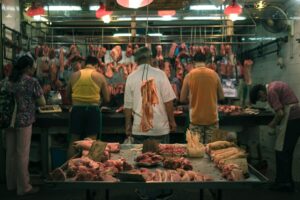 Argentina has just been approved to send pork to China, the world’s biggest pork consumer. The United States is currently the biggest pork and poultry supplier to China. However, exports are set to lose out with 62% tariff rates on pork. Therefore, Argentina is poised to become a big competitor in a very lucrative market. Talks between China and Brazil could open the Chinese market up to Brazilian meat exports if new export permissions are approved by the Chinese. Brazil is a leading producer of beef.

Crude oil is another product that could come under threat by the trade war. The United States is China’s 10th biggest supplier. China also receives crude oil from Brazil (6th biggest supplier), Venezuela (9th) and Colombia (13th). If trade war pressures do affect US oil exports, a significant market share will become available.

China imported US$75.8 million dollars of wine from the United States in 2018. It already has a strong trading relationship with Chile, with US$376.2 million of wine imported in 2018.  Argentina’s import numbers are much smaller at US$26.2 million, so there is an opportunity for Argentinian exporters to increase exports to this market. With American wine subject to increased tariffs, suppliers will opt to buy wine from other countries, such as Chile and Australia, that have zero tariffs on wine. Argentina is in talks with China to produce some sort of trade agreement, which could lower wine tariffs.

China imports about 250,000 cars each year from American producers. Tariff rates have increased from 25-40%, which is a hefty amount. Chinese car imports from the United States fell 17% last year and expected to fall further this year. The leading car manufacturer in Latin America is Mexico. Auto exports to China are growing but Mexico’s export market is still largely dominated by Mexico’s biggest trade partner, the United States. Additionally, import tariffs on cars from the rest of the world have been lowered to 15%. Here lies the potential for alliances to be created between Mexican importers and Chinese auto importing firms.

Cherries are becoming increasingly popular in China, where the colour red is a symbol of good luck. The vibrant fruit therefore makes for popular gifts during the Christmas and Chinese New Year period. As United States cherries now face 50% tariff rates, Chile has been able to capitalise on its stronghold on the Chinese market. 91% of Chilean cherries were sent to China last year, making it China’s biggest cherry supplier. Argentina has also negotiated an agreement to export cherries to China. 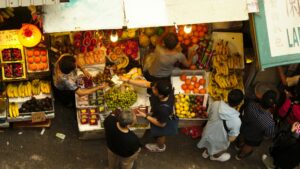 Chile is a leading provider of fruit to China. This is has been facilitated by the Chile-China FTA, updated this year in March. Chile provides 50% of China’s avocados. Avocados are also imported from Mexico. Additionally, Latin American countries are exporting grapes, plums, nectarines, peaches, apricots, apples, kiwifruit and blueberries to China. A growing affluent Chinese population is prepared to pay high prices for these types of imported fruit. Current leading fruit exporters are Chile, Peru and Ecuador. Other fruit producing countries should explore distribution agreements with Chinese distributors.

China has become the most important importer of minerals from Latin America. The country has also made extensive investments in extractive industries. Peru exports copper ore and Chile exports both copper ore and refined copper, which China uses in its power and construction industries. China also buys iron ore from Brazil, Chile and Peru, used to produce steel. Chinese investment focuses on extractive industries, so there are opportunities for Latin American firms to create complementary processing and service companies.

As countries go green, demand for lithium, an essential element for batteries, is skyrocketing. Significant shares of the world’s lithium reserves are found in Argentina, Chile, Peru and Bolivia. Given China is the world’s largest producer of electric vehicles, they need to have guaranteed sources of the metal. China has also made strategic acquisitions of lithium mining reserves in Latin America.

There are many directions the trade war could take. Low-cost manufacturing could be moved from China to Mexico’s maquiladoras. China could grant fruit export permissions to Brazil, the world’s third largest fruit producer. At the moment, there is a great deal of uncertainty. However, with current tariffs in place, Latin American countries should push forward the industries in which they have a comparative advantage and work to get their exports into China.

Ready to take the next step?

Today’s savvy entrepreneurs know now more than ever that Latin America’s exports are very valuable in global trade. If you want to establish a presence in Asia for your export business, then you should have the necessary expert assistance on hand before starting an expansion.

Consider partnering with Biz Latin Hub, your local back-office, and market-entry specialists. Get in touch with our team of legal and financial experts today for personalized information.