The USMCA trade agreement – how could it affect your business?

In the recent G20, held in Buenos Aires, Argentina, the new and improved NAFTA – officially called ‘USMCA’ (The United States Mexico Canada Agreement) was signed by all three parties. The new trilateral agreement was pursued principally by the US, with strong criticism from their government over the previous trade agreement, NAFTA. President Trump announced the following on Twitter – “Just signed one of the most important, and largest, Trade Deals in the U.S. and World History. The United States, Mexico, and Canada worked so well together in crafting this great document. The terrible NAFTA will soon be gone. The USMCA will be fantastic for all!”

Despite the change in name, the USMCA is essentially the NAFTA 2 – an updated version of the nearly 25-year-old trade agreement. Despite being signed, the deal is not yet to come into place as it has not been officially ratified. Now begins the somewhat tedious process of having this agreement approved by US, Canadian and Mexican lawmakers.

What are some of the key features of USMCA?

The agreement is quite broad covers a wide range of areas including agricultural produce, manufactured goods, employment conditions, digital trade amongst others. Some key features include:

Dairy Provisions – The new agreement will grant the United States access to 3.60% of the Canadian dairy market.

Automotive Industry – Automotive goods, namely cars or trucks, who have at least 75% of their components made in the US, Mexico, or Canada can be sold without tariffs. This deal is intended to incentivize and shift more car production to North America. Additionally, there is a requirement (that is expected to hurt Mexico) that at least 40% of each vehicle be produced by workers paid at a minimum hourly rate of US$16.

External Trade Agreement Warning – All parties in USMCA must provide a minimum of (3) months’ notice to the other members before they begin negotiating trade agreements. Some suspect this is a US-led initiative to limit Chinas influence in Mexico and Canada.

How will this affect business? 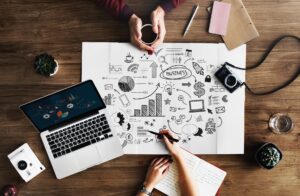 With minimum pay requirements, which were designed to essentially protect the US car industry from its southern neighbor, the US car market is expected to see growth.

While all countries have signed the agreement, assuming they are in part content with its terms and conditions, the deal will affect certain sectors and countries more than others.

A key aspect of the deal relates to the automotive industry. With minimum pay requirements, which were designed to essentially protect the US car industry from its southern neighbor, the US car market is expected to see growth as Mexican car manufacturer must implement changes to their employment contracts, specifically related to increasing hourly rates.

Online Canadian shoppers are expected to benefit from this deal. The value of any US purchase that is exempt from import duties or tax is being increased to USD$150 for customs duties and USD$40 for sales tax. There will be an expected boom in the opening of US online retail companies.

Mexico remains as an attractive jurisdiction for investors, particularly the Chinese market. While the automotive industry is expected to feel the squeeze given the minimum wage requirements, this sector remains appealing to Chinese business. In addition to automotive parts, renewable and traditional energy are industries in which Chinse businesses have comparative advantages – which could be supported by Mexico as a means to access nearby markets.

Additionally, machinery and the electrical sector are key industries where Mexico has strong global competitiveness. Chinese business remains eager to invest in these industries as part of their global expansion strategies. With the right support, Chine companies have every opportunity to continue their investment in Mexico and take advantage of the attractive and available business opportunities.

Now that the deal has been formally signed and is public, investors have been provided with renewed confidence in investing in and doing business in the Mexican marketplace, regardless of sector. This has already resulted in a substantial increase in companies investing and setting up businesses in Mexico.

For more information on how you can take advantage of the newly signed trade agreement between three global superpowers, reach out to the Country Manager of Biz Latin Hub Mexico, Alex, here.